As a method for vibration isolation, the traditional air table is now being challenged by the more compact effective Negative-Stiffness vibration isolators, developed by Minus K Technology 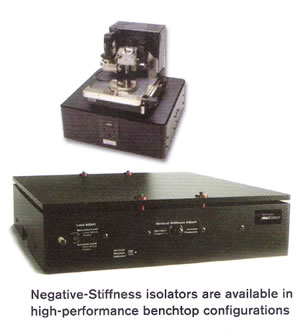 For almost 40 years pneumatic vibration isolators - air tables - have I been the mainstay fur stabilizing industry and academia's most critical micro-engineering instrumentation. But just as technology has been migrating steadily from micro to nano, so has the need for more precise vibration isolation in microelectronics fabrication, industrial laser/ optical systems and biological research.

Negative-Stiffness mechanism vibration isolation systems were invented by Dr David Platus, who worked in the nuclear, aerospace and defense industries conducting and directing analysis and design projects in structural-mechanical systems; he holds more than 20 patents related to shock and vibration isolation.

In 1993 Platus founded Minus K Technology to develop, manufacture and market vibration isolation products based on the company's patented technology. The resulting products, sold under the trade name Nano-K, are used in abroad spectrum of applications, including nano technology, biological sciences, semiconductors, materials research, zero-g simulation of spacecraft and high-end audio.

Basically cans of air, air tables have been used for isolation purposes since the 1960s and are still the most popular isolators used But air tables with resonant frequencies at 2 to 2.5Hz can typically handle vibrations down to only about 8 to l0 Hz, not quite low enough for optimum performance with modern nano-equipment. Also, greater isolation efficiencies are needed in the frequency ranges air isolators can handle.

Because of their very high isolation efficiencies, Negative-Stiffness vibration isolation systems enable vibration-sensitive instruments, such as scanning probe microscopes, micro-hardness testers, profilers and scanning electron microscopes, to operate in harsh conditions and severe vibration environments that would not be practical with top-performance air tables and other pneumatic isolation systems.

Negative-Stiffness isolators employ a different and completely mechanical concept in low-frequency vibration isolation. Vertical-motion isolation is provided by a stiff spring that supports a weight load, combined with a Negative-Stiffness mechanism. The net vertical stiffness is made very low without affecting the static load-supporting capability of the spring. 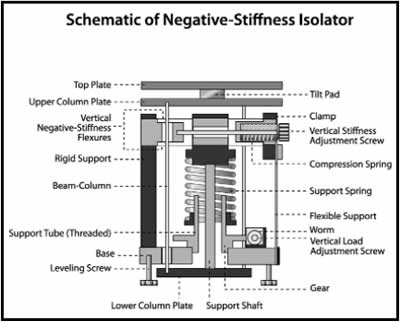 The result is a compact passive isolator capable of very low vertical and horizontal natural frequencies and very high internal structural frequencies. The isolators (adjusted to 0.5Hz) achieve 93% isolation efficiency at 2Hz; 99% at 5Hz; and 99.7% at 10 Hz.

Low Hertz perturbations: An air table will amplify vibrations in a typical range of 2-7Hz; this is because of the natural frequencies at which air tables resonate. All isolators will amplify at their resonant frequency, and then they will start isolating. So with an air table, any vibration in that range could not only fail to be mitigated, it could be amplified. The low cycle perturbations would just come straight through to the instrument.

Negative-Stiffness isolators resonate at 0.5Hz, At this frequency there is almost no energy present. It would be very unusual to find a significant vibration at 0.5 Hz.

Image clarity: Negative-Stiffness vibration isolation can reduce vibration noise levels in Atomic Force Microscopes, for example, by a factor of 2 to 3 when compared with top-performance air tables. This is significant for noise levels in the sub-Angstrom range. This results in clearer images and features not discernible with pneumatic isolation systems.

Severe vibration environments: As nano-cquiprnent becomes more prevalent, lab sites are being set up in much more severe vibration-prone environments, such as upper floors of buildings and cleanrooms. Such severe vibration locations are too extreme for pneumatic isolators to do their job effectively. But Negative-Stiffness isolators perform well in such environments, producing much better images and data than can be obtained with even the best high-performance air tables.

Harsh environments: Air tables are not particularly compatible with operations in vacuums, extreme high and low temperatures, and radiation. Yet these harsh environments are often necessary when conducting research or testing, such as with cryogenic chambers in semiconductor research.

All metal Negative-Stiffness systems can be configured to be compatible with high vacuums and other adverse environments, such as extreme high and low temperatures, and radiation. With vacuums, for example, Negative-Stiffness isolators can be used right inside the vacuum chambers. This offers other advantages, such as much lower payload weights and more compact systems, and eliminates problems associated with vacuum chamber feed-through.

Furthermore, large tanks of compressed gas have to be mounted very securely to minimize their danger. Changing the tanks can be quite difficult and inconvenient as well. Compressors are sources of both mechanical and acoustic noise and are very
poor choices from a vibration standpoint
.
It is advantageous to isolate the nano-environment mechanically without recourse to compressed air. Negative-Stiffness isolators do not require compressed air and operate purely in a mechanical mode.

Location selection: Air tables are big, bulky structures that take up a lot of lab space. The high-performance air tables are even bigger. This can be a limiting factor when laying out equipment in the lab. Negative-Stiffness isolators are available in high-performance benchtop configurations, considerably more compact than air tables and easy to move around.

They are also available as workstations, tables and floor platforms where these configurations are required.

Negative-Stiffness isolators provide a very simple manual adjustment to accommodate variations in weight loads. For applications where manual load adjustment is not practical they provide an auto-adjust system that maintains the isolator in a precise vertical equilibrium position.

Scanning probe microscopes: Scanning probe microscopes (SPMs) have vibration isolation requirements that are unparalleled in the metrology world. The vertical axis is the most sensitive for most SPMs. They can also be quite sensitive to vibrations in the horizontal axes. To achieve the lowest possible noise floor, i.e. on the order of an Angstrom, isolation is always used.

Laser and optical equipment: Laser and optical systems, whether used in an academic lab or in an industrial environment, are very susceptible to vibrations from the environment. These instruments almost always need vibration isolation. Traditionally large air tables have been the isolators preferred for optical systems, but Negative-Stiffness isolators are becoming a popular choice because they provide 10 to 100 times the performance (depending on vibration frequency). Laser-based interferometers are extremely sensitive devices capable of resolving nanometre-scale motions and features. They often have very long mechanical paths, which makes them even more sensitive to vibrations. The sophisticated modern ellipsometry techniques that allow this high performance rely on low noise to be able to detect fringe movement. Properly isolating an interferometer will allow it to provide the highest possible resolution.

Optical profilers have similar sensitivity to vibrations. Optical component systems are often quite complex. The long optical paths can lead to angular magnification of vibrations. Optical air tables can make the problems worse since they have a resonant frequency that often matches that of floor vibrations. Negative-Stiffness 0.5Hz isolators provide isolation in these environments when air tables simply cannot.

As industrial researchers and universities continue to broaden their nanotech work, necessitating more sensitive equipment and expanded lab facilities, vibration-handicapped environments will become more prevalent, and a better vibration isolation solution will be required than that provided by air tables for the past half-century. It appears Negative-Stiffness vibration isolation will fill that void. CT