For quite some time the problem of transmission of high-fidelity vibrations is a subject that are both known and thorny for manufacturers. Mechanical transducer sources (Platinum vinyl) and digital (CD transport) are the most sensitive to these disturbances that physically intermodulate with their reading. The tip of a needle in microsillon is subjected to micro-displacements which generate the signal of very low output level of the needle.

On a CD player, it is the reflection in a prism of the infinitesimal laser beam which is at the origin of the digital bits. It is easy to understand that the superposition of a random and external movement to these two mechanisms degrade the quality of the signal they generate, hence the need to mechanically isolate them.

The current most common proposals range from simple mechanical decoupling (tips, cones, ball systems, etc.) to sophisticated stands such as those proposed by HRS or Music Tools for example, through proprietary solutions embarked like the Mechanical Grounding of Goldmund.

The Californian company Minus K Technology specializes in high-level anti-vibration equipment for applications in the fields of nanotechnology, semiconductor and scanning microscopes, to name but a few. They supply to governmental laboratories in 41 countries around the world.

Founded in 1993 by David L. Platus, Minus K manufactures anti-vibration tables with a decoupling system entirely mechanical patented using Negative-Stiffness mechanism technology. This system amounts to putting the mass placed on the table in near-weightlessness, with the tables' relative rigidity approaching zero creates the ideal "decoupling". The table consists of a plateau and a base insulated from one another by horizontal and vertical (adjustable mechanism) isolators. There are different tables whose system of insulation corresponds to a given weight range, where the adjustment of the mechanism creates weightlessness.

The performance is eloquent with a peak transmission of vibrations at  0.5 Hz vertically and 1.5 Hz horizontally, i.e. from 10 to 100 times more efficient than any competing product. 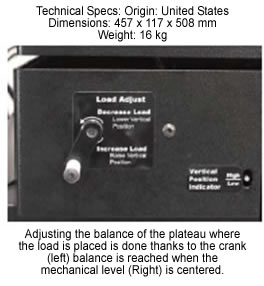 The table 100BM-8 we have available is for loads between 23 And 48 kg. The BM-8 series includes nine models for loads ranging from 4.5 kg and culminating at 115 kg. We listened to the Swissonor Thorens TD160 turntable and Nagra CDP drive which had to be weighed to properly on the table.

Then we adjusted the crank mechanism to balance the plateau with the weight change. An indicator lets you know if you are above or below the point of balance.

Once each source rested on our stand with the isolator (decoupled shelf),  the results are absolutely without compare. We are literally flabbergasted by the stability of the image obtained, by the ultra-precision of the focus, by the majestic opening of the sound scene, the increase in dynamics and the density of the excavation of each note down to its smallest details.

Once returning to Earth, emotional weightlessness finished, although lost in listening we yet find this magnificent magic space, this holographic materialization, this virtual reality.