The below article was sent to Inner-Audio by Zebra Communications. Zebra Communications specializes exclusively in the development and execution of feature story PR campaigns for industrial and high-tech companies. So while reading the article, please, take into account that it does not represent standard journalistic content. It is provided by the manufacturer and its ground crew.

But we found the article interesting and informative enough to be included in the NEWS section, especially for those turntable lovers who have not yet considered isolating their analogue source from vibrations coming from outside the system. Another encouraging factor is that MinusK products and technology are used not just in audiophilia but in microscopy, micro-hardness testing, optical systems, spacecraft testing, biology/neuroscience etc.

The impact of external vibrations plays a critical role in the sound quality produced by turntables and tube amps within high-end audio systems. Capacitors, resistors, transistors and other electronic components used in many audio systems are likewise sensitive to vibration. 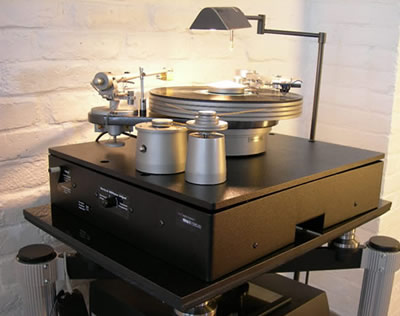 Vibration isolation in the playback process is crucial to experiencing a high-quality audio. Any external vibration, no matter how slight, even someone walking near the turntable or vibration from floor-mounted speakers, is sensed by the turntable's stylus and affects the sound being played back from the record.

With recorded discs, sound waveforms are captured in the disc grooves with microscopic undulations. The turntable's cartridge and stylus trace these minute wave forms, play them back with very sensitive low voltages and convert them into an audio signal. This is how the sound captured in the record grooves is reproduced. But this process is extremely sensitive to movement and vibration.

Vibrations in the range of 2 Hertz (Hz) to 20,000 Hz will influence the sound reproduction in audio systems. Vibration within this range can be caused by a multitude of factors. Every structure is transmitting noise. Within the home or building itself, the heating and ventilation system, fans, pumps and elevators are just some of the mechanical devices that create vibration. Depending on how far away the audio system is from these vibration sources, and where in the structure the audio system is located, whether on the third floor or in the basement, for example, will determine how strongly the sound quality will be influenced.

External to the building, audio equipment can be influenced by vibrations from adjacent road traffic, nearby construction, loud noise from aircraft and even wind and other weather conditions that can cause movement and vibrations of the structure.

These internal and external influences primarily cause lower frequency vibrations which are transmitted through the structure, creating strong disturbances in sensitive, high-end audio systems, making vibration isolation a necessity

"People who care about sound quality -- such as audiophiles, musicians and recording engineers -- can have very strong, subjective preferences about what constitutes good sound," says Eric Jacobs, President of The Audio Archive, which provides consulting and audio transfer services to digitize, restore and preserve sound recordings from a wide array of current and obsolete analog media formats. "Some people like resonances in their system that emphasize particular frequencies, so they will insist, for example, that their equipment must rest on a maple wood support because it has a certain resonance to it that makes the sound more appealing to them. Others, particularly those engaged in audio restoration or archival work, want to experience sound as the mastering or recording engineer intended it, without further coloration."

"Most manufacturers of high-end turntables recognize that external vibration is a problem, and will go to great lengths to minimize it in their turntable designs," continues Jacobs. "Quality turntables, for example, are built with superb platter bearings to minimize rumble. Some turntables can cost as much as $100,000 and use air or magnetic bearings, and other sophisticated approaches. They often incorporate high-mass platters that are designed to increase speed stability and reduce flutter. They might use exotic materials to dampen vibrations without deadening the sound. Tone arms have their own set of vibration and resonance characteristics which manufacturers attempt to isolate from the audible frequencies through geometry, localized vibration isolation and damping. Turntable designers go through this elaborate process to try and eliminate vibration throughout the entire turntable playback structure." 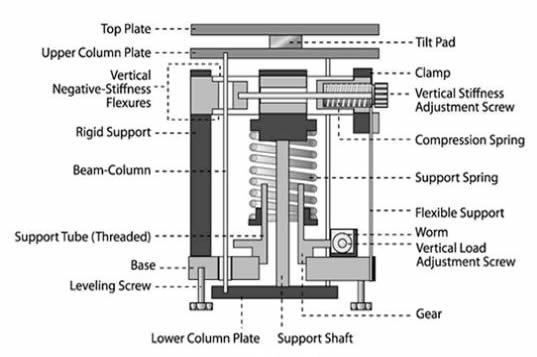 But for the majority of high-end turntables that are manufactured without factory-installed vibration isolation, third-party air-based vibration isolators have become a popular accessory. These systems typically have a vibrating power pump to supply air, with a tank that holds the pressurized air and delivers steady pressure to the isolator. The noisy pump is usually located outside of the room that has the audio equipment, and the air hoses are run over to the tank and isolating platform.

"Air systems are usually a less than optimal set-up," explains Jacobs. "They do achieve some isolation, but we have found that like most of the mechanical audiophile vibration isolation devices, they provide limited isolation performance. They do isolate some -- usually in one dimension (vertically) with limited horizontal isolation -- but they do not isolate to the extent that is really needed at very low resonance frequencies."

Several years ago, aware of the limitations in even the best audiophile vibration isolators, The Audio Archive began an extensive search for better vibration isolation systems to facilitate the world-class sound reproduction services that it provides to its clients, including some of the world's leading archives, libraries and record labels.

"Having thoroughly tested systems available to the audio market and generally been unsatisfied, we then looked outside of the audio world and conducted an in-depth search of industrial vibration isolation systems," says Jacobs. "We learned about negative-stiffness vibration isolation, which was being used to eliminate vibrations in ultra-sensitive atomic force microscopes, and in nanotechnology labs where objects are literally built one molecule at a time. As we learned more about negative-stiffness isolators, the more interesting it seemed for audio vibration isolation."

"After extensive testing in our own audio laboratory, which is outfitted with extremely sensitive and accurate audio reproduction systems and measurement equipment, we confirmed that negative-stiffness isolators are unrivaled in vibration isolation for high-end audio reproduction," continues Jacobs. "Negative-stiffness isolators were not just a little bit better, they were significantly better. Whether with turntables, tube electronics, CD transports or other audio equipment, negative-stiffness isolators provided an unheard of 0.7 Hz* isolation performance vertical, and 1.5 Hz horizontal, using a totally passive mechanical system -- no air or electricity required. We were not really expecting to find a passive vibration isolation system that outperformed an active system -- that was a big, and very pleasant surprise for us." 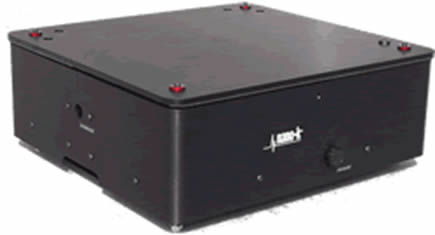 Where air isolation systems deliver limited isolation vertically and very little isolation horizontally, negative-stiffness isolators have the flexibility of custom tailoring resonant frequencies vertically to 0.5 Hz, and horizontally to 1.5 Hz (with some products as low as 0.5 Hz horizontally).

Vibration Transmissibility
Vibration transmissibility with negative-stiffness isolators is substantially improved over air systems, which can make vibration isolation problems worse since they have a resonant frequency that can match that of floor vibrations. Transmissibility is a measure of the vibrations that are transmitted through the isolator relative to the input vibrations. The negative-stiffness isolators, when adjusted to 0.5 Hz, achieve 93 percent isolation efficiency at 2 Hz; 99 percent at 5 Hz; and 99.7 percent at 10 Hz.

"Negative-stiffness isolators work with audio systems in two ways," continues Jacobs. "One, they cancel out large vibrations, what we refer to as footfall. If a turntable is set up on anything other than a concrete slab floor or other large inert mass, then every time someone walks in the vicinity of the turntable, the vibrations from their footsteps are transmitted through the floor to the support stand and into the turntable, and finally show up in the recording. People will literally tiptoe around their audio playback systems, but the playback process is so sensitive that it will still pick up footsteps in the hallways or rooms some distance away. And two, the negative-stiffness isolators block out building vibrations in the higher audible frequencies."

But active systems have a limited dynamic range that is easy to exceed, causing the isolator to go into positive feedback and generate noise. Although active isolation systems have fundamentally no resonance, their transmissibility does not roll off as fast as negative-stiffness isolators.

Air tables will actually amplify, instead of reduce vibrations in a typical range of 2 Hz to 7 Hz because of the natural frequencies at which air tables resonate. All isolators will amplify at their resonant frequency, and then they will start isolating. So with air tables, any vibration in that resonant frequency range could not only fail to be attenuated, it could be amplified. In this case, the low cycle perturbations will come straight through to the audio system.

Simpler is Better
If audio systems can be isolated from vibration without having to deal with compressed air or electricity, then it makes for a system that is simpler to install, easier to set-up, and more reliable to operate and maintain over the long-term.

For example, because active system isolators run on electricity they can be negatively influenced by problems of electronic dysfunction and power modulations. And air tables need a constant supply of compressed air, which requires a compressor to be located near the audio set-up. Compressors are sources of both mechanical and acoustic noise and have the potential to be part of the problem rather than the solution. Not the best choice from a vibration elimination standpoint.

Negative-stiffness isolators do not require electricity or compressed air. There are no motors, pumps or chambers, and no maintenance because there is nothing to wear out. They operate purely in a passive mechanical mode.

"These isolators provide a great deal of flexibility," says Jacobs. "For example, it is possible to configure a state-of-the-art mobile turntable that can be moved around a facility without having to worry about electrical power and pumps, or whether it is located in the basement or on the second floor. This was an unexpected bonus, and has helped increase the flexibility of our studio."

"And then there is the sound, which is what really matters most to our clients," continues Jacobs. "With negative-stiffness isolators there is a sense of harmonic rightness. Instruments sound much more like real instruments, and voices sound like they are in a real acoustic space, with real air around them. The ability to "see" clearly into the entire three-dimensional soundstage is greatly enhanced. Improvements in rhythm and pace are captivating. Negative-stiffness isolators truly represent a significant advance in sound quality for high-end audio."