Inglewood, CA--After completing the order for the first of six negative-stiffness vibration isolators to the James Webb Space Telescope (JWST) project in February 2012, Minus K Technology has now received the order to provide vibration isolators numbers two through six for JWST ground testing at the Johnson Space Center.

The JWST will be placed in a thermal vacuum chamber at the Johnson Space Center and supported by a set of six custom Minus K vibration isolators. "The isolators will utilize Minus K's new thermal compensator device, a passive mechanical device (patent pending), requiring no air or electricity just like our isolators." says David Platus, president of Minus K and principal inventor of the patented negative-stiffness technology. "The compensator will adjust the isolators as the temperature changes throughout the testing at JSC, keeping the JWST in the proper position."

The JWST is a large-aperture infrared space telescope that has a large mirror, 6.5 meters (21.3 feet) in diameter and a sunshield the size of a tennis court. The JWST is planned to be launched from Arianespace's ELA-3 launch complex at European Spaceport located near Kourou, French Guiana in 2018 aboard an Ariane 5 launch vehicle.

Minus K Technology says it works with many aerospace and education laboratories for custom vibration isolation systems and has manufactured isolators for the Jet Propulsion Laboratory (JPL), German Center for Aerospace (DLR), and the European Space Research and Technology Centre/European Space Agency (ESTEC/ESA) in addition to the JWST custom isolators for the National Aeronautics and Space Administration (NASA).


IMAGE: Minus K negative-stiffness vibration isolators will be used for ground testing of the James Webb Space Telescope (JWST). (Courtesy Minus K Technology) 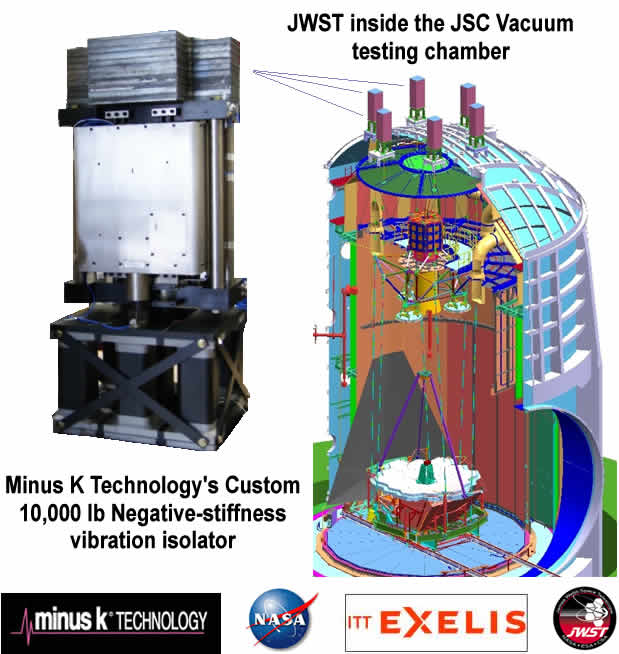