The need for precise vibration isolation with scanning probe microscopy (SPM) and near-field scanning optical microscopy (NSOM) systems is becoming more critical as resolutions continue to bridge from micro to nano. Whether used in academic labs or commercial facilities, SPM and NSOM systems are extremely susceptible to vibrations from the environment. When measuring a very few angstroms or nanometers of displacement, an absolutely stable surface must be established for the instrument. Any vibration coupled into the mechanical structure of the instrument will cause vertical and/or horizontal noise and bring about a reduction in the ability to measure high resolution features - the vertical axis being the most sensitive for SPMs, but they can also be quite sensitive to vibrations in the horizontal axis. 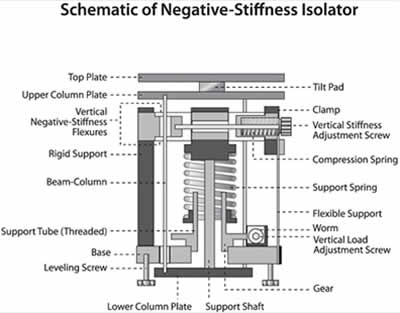 Traditionally, bungee cords and high-performance air tables have been the vibration isolators most used for SPM and NSOM work. The ubiquitous passive-system air tables, adequate until a decade ago, are now being seriously challenged by the need for more refined imaging requirements. Bench top air systems provide limited isolation vertically and very little isolation horizontally. Also at a disadvantage are the active isolation systems, known as electronic force cancellation, that use electronics to sense the motion and then put in equal amounts of motion electronically to compensate and cancel out the motion. Active systems are somewhat adequate for applications with lasers and optics, as they can start isolating as low as 0.7 Hz, but because they run on electricity they can be negatively influenced by problems of electronic dysfunction and power modulations, which can interrupt scanning.

Lately, the introduction of integrated microscopy systems employing multiple microscopes is enabling more complex optical measurements, but these systems are also much heavier, and there has been little vibration isolation technology available for such heavy instrumentation. Air tables, which have been liberally used for optics applications, are not ideal for these nano-scale resolution systems because of their inability to effectively isolate vibrations below 20 Hz. Nor can active systems be used with these newer combination systems because of their inability to handle heavy instrumentation. 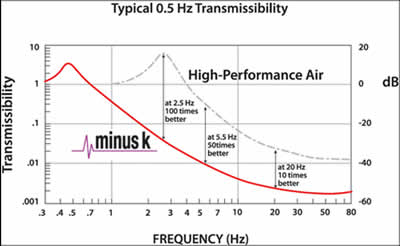 "Another aspect of optical integration is that SPMs can measure forces, but they cannot measure distribution of light in micro-lasers, silicon-based wave guides, fluorescently stained biological materials, etc.," explains Lewis. "For example, there are many important advances occurring in the application of photonics to silicon structures and plasmonic metals. In the past, these photonic structures were in the micrometer range, now they are nanometric."
The Nanonics platform can be used for structural and photonic characterization, as well as the structural and chemical characterization that is available with AFM and Raman integration.

Facilitating this integration is not only the geometry of the AFM/NSOM platform but also a new generation of AFM glass probes that have very unique characteristics - such as hollow glass probes with cantilevered nano-pippets for material deposition, probes with glass surrounding a single nano-wire in the middle for ultrasensitive electrical measurements, or dual wire glass probes for thermal conductivity and thermocouple measurements. Glass probes are ideal for Raman integration because of their transparency to laser light and no Raman background. They also expand outward allowing unprecedented correlation of Raman and AFM, also permitting multiple probes to be brought easily together, which is very difficult with a standard AFM. 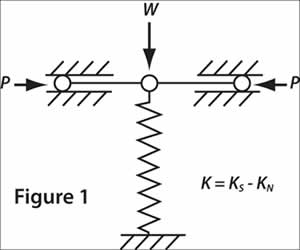 About Minus K Technology, Inc.

Minus K® Technology, Inc. was founded in 1993 to develop, manufacture and market state-of-the-art vibration isolation products based on the company's patented negative-stiffness-mechanism technology. Minus K products are used in a broad spectrum of applications including nanotechnology, biological sciences, semiconductors, materials research, zero-g simulation of spacecraft, and high-end audio. The company is an OEM supplier to leading manufactures of scanning probe microscopes, micro-hardness testers and other vibration-sensitive instruments and equipment. Minus K customers include private companies and more than 200 leading universities and government laboratories in 35 countries.

Jim McMahon writes on instrumentation technology.
His feature stories have appeared in hundreds of industrial and high-tech publications throughout the world and are read by more than 5 million readers monthly. He can be reached at jim.mcmahon@zebracom.net.