For decades, pneumatic air tables have been the workhorse for reducing vibrations in cleanrooms for manufacturing and research, where critical micro-engineering instrumentation is employed. But just as technology has steadily pushed the boundaries into nano-applications in microelectronics fabrication, industrial laser/optical systems and biological research, so has the need become ever more necessary for improved precision in vibration isolation.
Increasingly, pneumatic air tables are taking a back seat to the more recent technology of negative-stiffness vibration isolation, which over the past 20 years since its introduction, has proven itself in thousands of applications throughout industry, government and academia, including some of the most diverse and challenging environments, such as cleanrooms.

"We use molecular design, tailored syntheses, inter molecular interactions and selective chemistry to direct molecules into desired positions to create nanostructures, to connect functional molecules to the outside world, and to serve as test structures for measuring single or bundled molecules" said David McMillan, lead technician at the Weiss Group. "Critical to understanding these variations has been developing the means to make tens- to hundreds-of-thousands of independent single-molecule measurements in order to develop sufficiently significant statistical distributions, while retaining the heterogeneity inherent in the measurements." 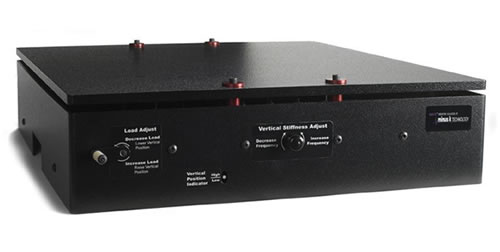 Vibration Sources
Vibration can be caused by a multitude of factors. Every structure is transmitting noise. Within the building itself, the heating and ventilation system, fans, pumps and elevators are just some of the mechanical devices that create vibration. Depending on how far away the cleanroom equipment is from these vibration sources, and where in the structure the equipment is located, whether on the third floor or in the basement, for example, will determine how strongly the equipment will be influenced. External to the building, the equipment can be influenced by vibrations from adjacent road traffic, nearby construction, loud noise from aircraft, and even wind and other weather conditions that can cause movement of the structure.
Vibrations in the range of 2 hertz (Hz) to 20,000 Hz will influence sensitive equipment. But these internal and external influences primarily cause lower frequency vibrations, which are transmitted through the structure, creating strong disturbances in precision equipment used in cleanrooms.

Also known as electronic force cancellation, active vibration isolation uses electronics to sense the motion, and then adds forces electronically to effectively cancel out or prevent it. Some active isolation systems can start isolating as low as 0.7 Hz, But active systems have a limited dynamic range that can be exceeded, potentially causing the isolator to go into positive feedback and generate noise. Although active isolation systems typically have low response at resonance, their vibration transmissibility does not roll off as fast as with Negative-Stiffness isolators. Also, because active systems run on electricity, they can be negatively influenced by problems with the electrical supply available. They also generate heat, which can lead to thermal drift problems in certain applications.

Vibration isolation equipment within cleanrooms
Used extensively in semiconductor manufacturing, biotechnology, the life sciences, and other fields that are very sensitive to environmental contaminants – such as dust, airborne microbes, aerosol particles, and chemical vapors – cleanrooms provide an enclosed environment with a controlled level of contamination that is specified by the number of particles per cubic meter at a specified particle size. The air entering a cleanroom from outside is filtered to exclude dust, and the air inside is constantly recirculated through high-efficiency particulate air (HEPA) and/or ultra-low particulate air (ULPA) filters to remove internally generated contaminants. Equipment employed inside the cleanroom must be designed to generate minimal air contamination. This includes vibration isolation equipment, which can range from relatively simple rubber blocks, metal springs and breadboards, to highly efficient air systems, active electronic systems, and negative-stiffness systems – constructed with more advanced technologies and materials for higher precision vibration isolation.

Vibration isolation tables and workstations are required to meet the same cleanroom and contamination standards that the components they are protecting from vibration must meet. Completely enclosed isolation modules and vented exhaust systems are also available to keep these workstations in compliance with cleanroom standards.

All surfaces of the isolation table should be accessible for cleaning, and constructed so that they can be easily wiped to maintain cleanliness. Isolator diaphragms – for compressed air tubing and electrical supply – should meet the specified outgassing, nonvolatile residue and total mass loss specifications to keep molecular contamination to an absolute minimum.

Vertical and Horizontal Isolation
Air tables do achieve isolation, but primarily in the vertical vector, with limited horizontal isolation. The horizontal vector is often overlooked because horizontal building vibrations are less obvious, but nevertheless, transmitted to the cleanroom instrumentation. negative-stiffness isolators achieve a high level of isolation in both vertical and horizontal directions.

Vibration Transmissibility of Low-Hertz Vibrations
Vibration transmissibility is a measure of the vibrations that are transmitted through the isolator relative to the input vibrations.  Every isolator will amplify at its resonant frequency, and then start isolating.

Air systems will actually amplify, instead of reduce, vibrations in a typical range of 1.5 to 3 Hz, due to the natural frequencies at which air tables resonate.  The low-cycle perturbations will come straight through to the instrumentation.  Air tables do not isolate to the extent that is really needed at very low resonance frequencies.

Negative-stiffness isolators resonate at 0.5 Hz – and in some cases at lower frequencies both vertically and horizontally. At this frequency there is almost no energy present. It would be very unusual to find a significant vibration at 0.5 Hz. Vibrations with frequencies above 0.7 Hz are rapidly attenuated with increases in frequency. When adjusted to 0.5 Hz, negative-stiffness isolators achieve 93 percent isolation efficiency at 2 Hz; 99 percent at 5 Hz; and 99.7 percent at 10 Hz.

Negative-stiffness vibration isolation vs. pneumatic isolation tables
Pneumatic isolation tables operate on a supply of compressed air or gaseous nitrogen. When used in cleanroom environments (Class 10,000 and lower), the supply and exhaust gases need to be vented and piped out of the controlled areas, to ensure the gases will not contaminate the cleanroom environment. The air compressor, located outside of the cleanroom, is itself a source of low-hertz mechanical vibration.

Negative-stiffness isolators employ a completely mechanical concept, with no air or electricity required. There are no motors, pumps or chambers, and no maintenance because there is nothing to wear out. They operate purely in a passive mechanical mode.

If sensitive instrumentation in the cleanroom can be isolated from vibrations without having to deal with compressed air or electricity, then it makes for a system that is simpler to install, easier to set-up, and more reliable to operate and maintain over the long-term.

Location Flexibility
Air tables are big and bulky, making them a tougher fit for the precious laboratory and production space requirements of cleanrooms. By contrast, negative-stiffness systems can be made to be compact, taking up very little footprint. Instrumentation can be positioned or moved around a facility without having to worry about feed-through for electrical power and air hoses. Large negative-stiffness workstations are also available when increased working space is required.

Because of their very high isolation efficiencies, negative-stiffness vibration isolation systems enable sensitive instruments – such as scanning probe microscopes, laser-based interferometers, optical profilers and scanning electron microscopes – to be located wherever a cleanroom needs to be set up, whether that be in a basement or on the building’s sixth floor.  Extreme vibration-sensitive environments would not be practical locations for pneumatic isolation systems.