By Dr. David L. Platus, President and Founder, Minus K Technology, Inc.
LED BY PROFESSOR LAWRENCE E. COHEN PH.D.OF YALE UNIVERSITY'S DEPARTMENT OF CELLULAR AND MOLECULAR PHYSIOLOGY, the small lab in room BE58 at the Yale School of Medicine has been conducting research on neuronal activity in brain cells to develop methods for imaging brain activity, and then uses these methods to study the brain. The university has been developing the method for imaging brain activity for 42 years, but it was not until several years ago that the lab opted to move to a higher level of vibration isolation technology to support its microscopy-imaging.

It is not unusual for universities, and industry for that matter, to have to deal with vibrations that compromise the imaging quality and data sets that they acquire through microscopy. Although it is certainly the desire of every lab to rid the unwanted vibration, conventional systems such as air tables, have not been successful in providing an adequate level of vibration isolation for ultra-sensitive equipment measuring at the Angstrom and micron levels. 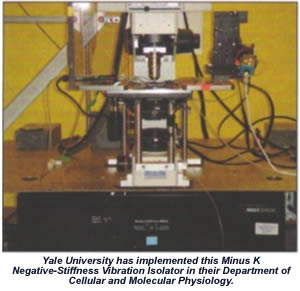 "Monitoring many neurons or regions simultaneously can improve our understanding about how nervous systems are organized," Cohen continues. "For example, the cells in your spinal cord have to get information from your toe, and also send information to your toe. That signal is a propagated electrical wave of membrane potential, and dyeing that membrane can provide an optical signal that is used to measure that propagated wave."
The lab uses a high-speed camera to view these changes. It has a speed of 2,000 frames-per-second with very high quantum efficiency, which is the quantity of photons that get converted into electrons. The camera has a quantum efficiency of about 0.9, which converts almost all the photons into electrons.

In the lab's optical monitoring of brain activity, each pixel in the recording receives light from a small portion of neurons which have been stained by microinjection of the dye into the brain. After waiting for the dye to spread into the processes, the dye can be used to monitor changes in membrane potential in dendrites and axons.

When a low magnification objective is used to form an image of a vertebrate preparation on the lab's 464 element photodiode array, or 80 x 80 pixel CCD camera, each pixel receives light from hundreds or thousands of neurons.

It is also using a variety of microscopes to conduct this research including a laser scanning 2-photon microscope and an optical microscope. At this time, only the optical microscope is set on the Negative-Stiffness vibration isolation system, built by Minus K Technology.

"Measuring in the dimension of microns still requires vibration isolation because it is so small,'' Cohen says. ''Any small movement in the lab environment makes a big effect. If you are viewing at 10 , and it vibrates by 10 , then you are in big trouble.
"We were using air tables before, but the Negative-Stiffness isolator is much better," Cohen continues. "It reduces the vibration by a larger faction because it reduces the vibration in the X/Y plane just as well as in the Z plane, where the air table does not do well at all on the X/Y plane.

VIBRATION ISOLATION
Negative-Stiffness isolators employ a unique - and completely mechanical - concept in low-frequency vibration isolation. Vertical-motion isolation is provided by a stiff spring that supports a weight load, combined with a Negative-Stiffness mechanism. The net vertical stiffness is made very low without affecting the static load-supporting capability of the spring. Beam-columns connected in series with the vertical-motion isolator provide horizontal- motion isolation. The horizontal stiffness of the beam-columns is reduced by the "beam-column" effect. (A beam-column behaves as a spring combined with a Negative-Stiffness mechanism.) The result is a compact passive isolator capable of very low vertical and horizontal natural frequencies and very high internal structural frequencies. The isolators (adjusted to 1/2Hz) achieve 93% isolation efficiency at 2 Hz; 99% at 5 Hz; and 99.7% at 10 Hz.

Putting up with lab vibration noise problems for any amount of time, let alone for a period of years, can only be costly in terms of lost production, and will certainly inhibit the progress of the research.
tmd