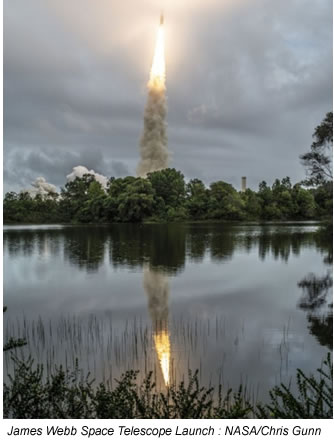 After more than two decades of development, on Christmas day 2021, NASA launched the James Web Space Telescope (JWST) from French Guiana on South America's northeast coast. The launch site was close to the Equator to give the extra push needed to reach JWSTs observing spot in the anti-sunward direction. The Sun-Earth Lagrange point 2 (L2) is nearly 1 million miles (1.6 million km) from Earth directly behind the planet. An object placed at L2 will go around the Sun with the Earth without falling behind.

The second stage of the Ariane 5 rocket separated from JWST 27 minutes after liftoff. Shortly afterward, at T+30 minutes after launch, JWST deployed its solar panels and reported that the spacecraft is "power positive." The James Webb Space Telescope had to fly to space folded up, as it’s too massive to fit in any existing rocket in its final form. Although the Ariane 5 rocket that carried it into space is nearly 18 feet, or 5.4 meters, wide, it was still not big enough to carry JWST to space completely unfurled. So it was compacted in an origami fashion to fit inside the rocket.

This timeframe had been dubbed “30 days of terror”, where there are 344 potential single-point failures in the spacecraft, 80% of which are associated with deployment mechanisms. The sunshield, for example, includes 140 release mechanisms, 70 hinge assemblies, eight deployment motors, about 400 pulleys and 90 cables that are a total of 400 meters long.

It was hard to put full redundancy within a release mechanism. There had been multiple deployment tests over several years on both small and full-sized models. If something didn’t go right during the deployment process, there were various contingency plans to try to fix any problem.

During the first week of the trip to L2, the sunshields unfurled to cool down the telescope. During the second week the aft radiator was deployed, the secondary mirror support structure and both primary mirror wings were unfolded.

The next step was aligning the 18 individual mirrors that make up the observatory's primary mirror. It’s a multi-day multi-step activity to activate and move each of its 18 primary mirror segments (which are adjustable) once out of their launch configuration.

The primary mirror segments are moved by six actuators that are attached to the back of each mirror piece with a seventh actuator located at its center that adjusts the mirror segment’s curvature.

The primary mirror is JWST's main light collection surface. It will reflect light to the tertiary mirror located on booms in front of the telescope, which then bounces the light into JWST's instruments. Each of the 18 segments of the primary mirror is plated in a shiny, but ultra thin, layer of gold. If left in launch position, they would act as individual telescopes with images that would be fuzzy and unclear. Once aligned, the mirror segments will act as one giant mirror 21.3 feet (6.5 meters) across, the largest ever in space.

The Hubble Space Telescope has observed infant galaxies as far back as approximately 400 million years after the big bang. JWST will be able to see much farther into the past, as much as 100 million years after the big bang, a period when most matter consisted of only the primordial elements and was just beginning to coalesce into stars and galaxies. 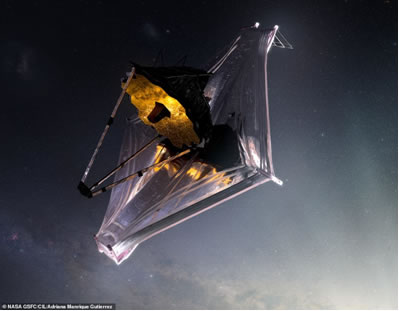 JWST will observe some of the universe’s most distant objects. As a result, in its more than 13-billion-mile journey, object’s light becomes heavily shifted toward the red side of the electromagnetic spectrum.  JWST’s primary mirrors are plated in 24-karat gold, because gold reflects red light better than nearly any other metal. The gold allows JWST’s mirrors to be 98% reflective, compared to the typical 85% reflectiveness of standard mirrors. The gold layers plating the scope’s mirrors are only 1,000 atoms thick. Only a golf-ball-sized amount of gold was used to coat the entire 21-foot-wide mirror.

The telescope’s primary operating temperature is only 50 degrees above absolute zero (-459º F). The colder the temperature, the fewer atoms move. At absolute zero 0 degrees Kelvin, the coldest possible temperature (-459º F), atoms essentially stop moving altogether. So the high-tech instruments aboard JWST will operate at nearly absolute zero to decipher the data accurately.

The telescope won’t work until it cooled down all the way to its low and stable temperature. Then, for the following five months, the telescope will be tested and calibrated for its science mission, beginning in the middle of 2022

Minus K’s Involvement in the Unprecedented Testing of JWST Before Getting Into Space
All of the JWST systems-level cryogenic vacuum tests were performed at the NASA Johnson Space Center’s (JSC) Chamber-A. Chamber A is now the largest high-vacuum, cryogenic-optical test chamber in the world, and made famous for testing the space capsules for NASA's Apollo mission, with and without the mission crew. It is 55 feet (16.8 meters) in diameter by 90 feet (27.4 meters) tall. The door weighs 40 tons and is opened and closed hydraulically. The air in the chamber weighs 25 tons, when all the air is removed the mass left inside will be the equivalent of half of a staple.

For three years, NASA JSC engineers built and remodeled the chamber’s interior for the temperature needed to test the James Webb Space Telescope. Chamber A was retrofitted with the helium shroud, inboard of the existing liquid-nitrogen shroud and is capable of dropping the chamber’s temperature farther down than ever, which is 11 degrees above absolute zero (11 Kelvin, -439.9 Fahrenheit or -262.1 Celsius).

A key addition to Chamber A was the addition of a set of six custom Minus K Technology’s negative-stiffness vibration isolators. The Minus K passive isolators do not require air or electricity and offer better isolation than air and active isolation systems. A major factor in the selection of the of the vibration isolators was that they not only isolate vibration vertically, but also horizontally at less than 1 Hz.

JWST was designed to work in space where the disturbances are highly controlled and only come from the spacecraft, while on Earth with all the ground-based disturbances, such as the pumps and motors, and even traffic driving by can affect the testing. The Minus K vibration isolators provided dynamic isolation from external vibration sources to create a near flight-like disturbance environment.

The isolators utilize Minus K's patented Thermal Responsive Element (TRE) compensator device, a passive mechanical device, requiring no air or electricity just like the isolators. The TRE compensator adjusted the isolators as the temperature changes throughout the testing at JSC, keeping the JWST in the proper position.

The Critical Design Review for Spacecraft-to-Optical Telescope Element vibration isolation system was completed one month earlier than scheduled at the end of 2011. The six Minus K negative-stiffness vibration isolators were installed on top (as shown in graphic below) of Johnson Space Center’s Thermal Vacuum Chamber A in March 2014.

JWST needed a support structure inside the vacuum chamber to hold equipment for the testing. Engineers installed a massive steel platform suspended from the six vibration isolators via steel rods about 60 feet long (18.2 meters) each and about 1.5 inches (or 38.1 mm) in diameter, to hold the telescope and key pieces of test equipment.  The sophisticated optical telescope test equipment included an interferometer, auto-collimating flat mirrors, and a system of photogrammetry ‘precision surveying’ cameras in precise relative alignment inside the chamber while isolated from any sources of vibration, such as the flow of nitrogen and helium inside the shroud plumbing and the rhythmic pulsing of vacuum pumps.

So the engineers could keep an eye on JWST while being tested, additional test support equipment including mass spectrometers, infrared cameras and television cameras were also connected to the support structure that was being suspended and isolation from vibrations by the Minus K negative-stiffness isolators.

JWST Pathfinder tests were planned into 3 major test campaigns prior to the final cryogenic vacuum test of the fully assembled flight Optical Telescope Elements (OTE) and the integrated Science Instrument Module (ISIM). The three Pathfinder tests are, OGSE1, OGSE2, and the ‘Thermal-Pathfinder’ (TPF).

These tests were incremented to be more complex to fully characterize the test facility including the cryogenic test chamber and the Ground Support Equipment (GSE).  The ‘flight-like’ test articles within the Pathfinder tests were designed to understand the thermal behaviors within the cryogenic environment.

The 30-day OGSE1 test was completed in May 2015 after the JSC Chamber-A was successfully commissioned in 2014 for JWST use. The 35-day OGSE2 cryo-vacuum test completed in October 2015 where all Primary, Secondary, Tertiary Test Objectives were all met. The successful completion of the OGSE2 marked a major milestone for JWST. This test was the first major cryogenic test with the actual flight telescope optical elements and a specialized fiber-fed optical equipment. It was the first test with the Aft-Optics-Subsystem (AOS) Source Plate Assembly or ASPA, designed to illuminate the telescope’s optics through the focal planes. The flight Tertiary Mirror (TM) and the Fine Steering Mirror (FSM) packaged in a bundle called the Aft-Optics-Subsystem was optically tested in an integrated configuration in its operational cryogenic environment.

In June 2015 after the OGSE1 and OGSE2 tests and before the ‘Thermal-Pathfinder’ (TPF) test, L3Harris (formerly ITT Exelis) who commissioned and installed the six negative-stiffness vibration isolators on top of Chamber A, made adjustments with the assistance of Minus K to the chamber isolators, setting them to their designed 0.5 Hz natural frequency. This allowed the isolators to provide an improvement in vibration reduction on the two primary mirror segments of TPF test.

The 35-day Thermal Pathfinder (TPF) cryogenic test was completed in October 2016. TPF included two spare flight-rated beryllium mirrors (one gold-coated) and ten non-flight gold-coated aluminum test segments functioning as thermal simulators. During the optical tests the mirrors had to be "phased" or aligned to a distance less than the wavelength of light, thousands of times smaller than the thickness of a human hair at a temperature hundreds of degree below zero.  Thermal Pathfinder underwent all thermal and vacuum tests that the actual JWST was planned to also go through in 2017.

The 93-day final test of the fully assembled JWST Optical Telescope Elements and Integrated Science Instrument Module (OTIS) started in July 2017.  It took about 10 days to pull the air from the chamber, and then about one month to lower the temperatures of JWST and its scientific instruments to the levels required for testing.

These tests included an important alignment check of JWST’s 18 primary mirror segments, to make sure all of the gold-plated, hexagonal segments acted like a single, monolithic mirror.  This required all 132 hexapod actuators to be tested for 6 degrees of freedom (DOF) and radius of curvature for each mirror segment. This was the first time the telescope’s optics and its instruments were tested together.

It was a long and complicated testing process to test JWST. The conditions it will encounter within the cold vacuum of space were simulated on the ground, ensuring the optics and instruments will perform perfectly after launch. This testing was very necessary since JWST will be close to a million miles away from Earth orbiting at L2. This will be too far away for repairs to be made as were done with the Hubble Space telescope.