At Kansas State University, a unique facility is dedicated to the research and development of new and innovative radiation detector technologies. The Semiconductor Materials and Radiological Technologies (SMART) Laboratory is the largest university-based radiation detection laboratory in the country. It focuses on the detection of neutrons and gamma-rays, primarily those from special nuclear material (SNM) for homeland security applications. SMART Lab investigates and fabricates a variety of detectors which include compact low-power neutron detectors, high-resolution room-temperature-operated semiconductor gamma ray spectrometers, pixelated devices for gamma ray or neutron imaging, and miniaturized gas-filled detectors. The laboratory builds detectors from start to finish in readily deployable packages for use in better securing our borders from nuclear materials such as plutonium and uranium.

The gamma ray detection aspect of the laboratory's research is focused on the discovery and development of new dense, high-Z* semiconductor materials, such as cadmium zinc telluride (CdZnTe or CZT) and mercuric iodide (HgI2), and several scintillator materials including lanthanum tribromide (LaBr3) and cerium tribromide (CeBr3). Research conducted on large crystal growth with high-Z semiconductor and scintillator materials has produced large crystal ingot yields. (*The atomic number which uniquely identifies a chemical element is represented by the symbol Z. Also known as the proton number, it is the number of protons found in the nucleus of an atom and identical to the charge number of the nucleus.)

Gamma rays are electromagnetic radiation of high frequency (very short wavelength), that are produced by sub-atomic particle interactions such as electron-positron annihilation, radioactive decay, fusion and fission. Gamma radiation is highly penetrating photons, extremely energetic. To directly detect them is very difficult, however - a material with a high Z number is needed, representing a high number of neutrons and protons in the nucleus. Those nuclei tend to stop gamma rays much better than other elements such as hydrogen or helium, for example. A crystal with a high-Z number converts the gamma rays from electromagnetic waves to excited electrons. The electrons move through the crystal or create light, one or the other, and produce something that is possible to be detected. If a crystal is very uniform, very homogeneous - it can be determined that a gamma ray interacted in the crystal by the effect that is observed in it. 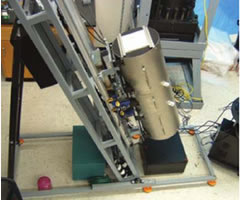 Growing Giant Crystal
At the SMART Laboratory, crystals of CdZnTe and the scintillator materials are grown via a vertical Bridgman furnace. In this process, molten material is directionally solidified from one end to the other to produce a large-volume ingot that is a single crystal. Methods to grow CdZnTe for gamma-ray spectrometers have been explored since the early 1990s, yet a reliable system to produce large crystals at an economical cost has not been achieved until relatively recently.

Higher ingot yields enable smaller, faster and more accurate sensors, and allow gamma-ray detectors to be more economical and field-portable - benefits that can have a significant impact on national security objectives. Radiation detectors using CZT can operate in direct-conversion (or photoconductive) mode at room temperature.

Essentially, SMART Lab researchers encapsulate the material to be grown inside of a quartz ampoule under vacuum. The quartz tube is put inside the furnace vertically bringing the material to a molten state between 500° - 1,100° C. Then they very slowly freeze the material from bottom to top. If the thermal gradients are correctly performed, a large crystal will develop. Once the crystal is grown, it is extracted from the tube, trimmed to size with a diamond wire saw and polished to produce a detector.

Vibration Isolation
Critical to maximizing ingot yield is maintaining a stable crystal growth process through the elimination of external vibrations.

"The general consensus within the crystal growth community is that uncontrolled vibrations can destabilize the growth interface," says Professor Mark Harrison with SMART Lab. "As the material is freezing from bottom to top, there is an interface between liquid and solid, and it sets up a natural convection flow that is ideal for growing a big, single crystal. If a vibration disturbs the liquid directly above the forming crystal solid, it can change the convection patterns and multiple crystals will form from the previous single crystal. Which is contrary to our purpose of growing large, single crystals."

Negative-stiffness mechanism (NSM) isolators have the flexibility of custom tailoring resonant frequencies vertically and horizontally. They employ a completely mechanical concept in low-frequency vibration isolation. Vertical-motion isolation is provided by a stiff spring that supports a weight load, combined with a NSM. The net vertical stiffness is made very low without affecting the static load-supporting capability of the spring. Beam-columns connected in series with the vertical-motion isolator provide horizontal-motion isolation. The horizontal stiffness of the beam-columns is reduced by the "beam-column" effect. A beam-column behaves as a spring combined with a NSM. The result is a compact passive isolator capable of very low vertical and horizontal natural frequencies and very high internal structural frequencies.

Vibration transmissibility with Negative-Stiffness is substantially improved over air systems, which can make vibration isolation problems worse since they have a resonant frequency that can match that of floor vibrations. Transmissibility is a measure of the vibrations that transmit through the isolator relative to the input vibrations. The NSM isolators, when adjusted to 0.5Hz, achieve 93 percent isolation efficiency at 2Hz; 99 percent at 5Hz; and 99.7 percent at 10Hz.

NSM transmissibility is also improved over active systems. Because they run on electricity, active systems can be negatively influenced by problems of electronic dysfunction and power modulations, which can interrupt crystal growth continuity. Active systems also have a limited dynamic range - which is easy to exceed - causing the isolator to go into positive feedback and generate noise underneath the equipment. Although active isolation systems have fundamentally no resonance, their transmissibility does not roll off as fast as Negative-Stiffness isolators.

"One of the concerns we had was surface waves coming across the ground, which induced vibration in the crystal growth system," explains Harrison.

"We are located in a basement," Harrison says. "Before we got the NSM system, I could actually see somebody walking down the stairs through the walls with a seismometer. With the Negative-Stiffness system in place, I can't even tell when they are shelling at the nearby Fort Riley military base.

Improving Detection of Special Nuclear Materials
Gamma ray detectors have been around for years, but they are either very low efficiency, poor performance or they require liquid nitrogen cooling, such as those employing germanium. Imagine the difficulty required to take liquid nitrogen into a remote desert searching for special nuclear material.

"What we are trying to do at SMART Lab is make it more feasible, more economical for these detectors to be put in place at every critical check point, at every airport and shipping port," Harrison says. "This will increase the possibility of detecting and intercepting shipments of special nuclear material, should they occur."

About Kansas State University SMART Laboratory
The SMART Laboratory serves as a center for undergraduate and graduate student education, as well as a facility, to accommodate funded research projects from various government and industrial sponsors. Since the opening of the Laboratory in 1998, eleven patents have been awarded to SMART Laboratory researchers for various detector designs, with several more patents still pending.

About Mark J. Harrison
Mark J. Harrison, PhD, has a B.S. in mechanical engineering, and an M.S. and PhD in nuclear engineering. Dr. Harrison holds the position of assistant professor in the Nuclear and Radiological Engineering Department at the University of Florida, Gainesville, and participates in radiation detection research at the Semiconductor Materials and Radiological Technologies Laboratory (SMART Lab) at Kansas State University, in collaboration with his colleague, Kansas State University resident professor Douglas S. McGregor.

About Minus K Technology, Inc.
Minus K® Technology, Inc. was founded in 1993 to develop, manufacture and market state-of-the-art vibration isolation products based on the company's patented negative-stiffness-mechanism technology. Minus K products are used in a broad spectrum of applications including nanotechnology, biological sciences, semiconductors, materials research, zero-g simulation of spacecraft, and high-end audio. The company is an OEM supplier to leading manufactures of scanning probe microscopes, micro-hardness testers and other vibration-sensitive instruments and equipment. Minus K customers include private companies and more than 200 leading universities and government laboratories in 35 countries.